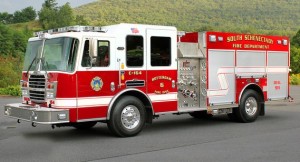 Rotterdam - On April 20th, 2019 the world lost a great man and Heaven gained an angel.

Louis was born at Ellis Hospital on May 11, 1928 to Giovanni Morrette and Greila (Pidgeon) Morrette.

He worked at his family owned gas station for many years with his brothers then moved over to Golub Corp. working as a truck mechanic. There he worked himself up to Fleet Maintenance supervisor.  We always said “Papa could fix anything!”

He was predeceased by his beloved wife Margaret (Baldwin) Morrette who he cared for with such love and dedication. When she died a large part of him died also, always wanting to go to her.

Survived to mourn his death is his sister Rose Peruzzi.

Along with these our dad leaves behind his cherished furry grandbabies: Rosie and Molly, who loved him so much! His life with his family will be remembered as loving, dedicated and strong.  He also leaves behind many nieces and nephews whom he loved very much. Family was everything to him.

Among his greatest accomplishments, our dad was the proudest of his role in the South Schenectady Fire Dept. where he leaves behind so many friends and people to celebrate him. He joined the department as a volunteer fire fighter and most recently was recognized for his 65 years of service, the longest of any fireman in that district. He served as fire chief for 16 years and was currently serving as a commissioner overseeing fire protection for the district.  He was a member of the Rotterdam Fire Chiefs Association, serving as chair, and was responsible for the construction of the Firematic Training Center on Burdeck Street. He was a member of the Association of Fire Commissioners and served as a member of the Bicentennial Committee celebrating 50 years of the fire department. In 1987, he was on the construction committee to help build the Jefferson School Playground.

Louis served with honor in the US Navy as a Seaman First Class just at the end of WWII.   He was honorably discharged on August 17, 1945 given commendations from Harry S. Truman and the Secretary of the Navy, James Forrestal.  These certificates he was most proud of and has them laminated along with his discharge papers.

So many things could be said about him but the most important to mention is his unfailing dedication and loyalty to his family and his friends. Jason, LLoyd, Dave, Steve, Tim B.,  Ronny,  Cathy, Terry, Kevin, Mac and Frankie are just some of the people whose lives he touched.  Please go out and keep his memory alive with the same loyalty to each other he always had.

We would like also to thank Father James Belogi who was not only his priest but his friend and wonderful mentor and counselor.  Every week we shared a meal with him and Father Jim was always there to “care” for him.

We would also like to thank Dr. Coleman, Dr. Stevens and Evan from the VA Clinic for their care of him through these many years.

The NY Yankees will have to win without him this year rooting them on.  He didn’t understand football but he knew his kids were crazy Giants Fans so he watched that weekly also. Every day we would have to call him to remind him to turn on the Yankees and what channel.  He loved sitting in his chair, watching, calling us when a great play would happen.  We will miss those calls.

Calling hours will be held at DeMarco-Stone Funeral Home, Rotterdam, from 4-7pm on Thursday, April 25th.

A mass of Christian burial will be held at St. Madeleine Sophie Parish, Carman Rd., Guilderland at 10 am on Friday, April 26th with Father Tom Morrette, Lou’s nephew and Pastor James Belogi serving.

Burial will be at Schenectady Memorial Park in Rotterdam where he will be alongside his beloved wife for eternity.

In lieu of flowers, donations can be given in his name to: South Schenectady Fire Dept. or St Madeleine Sophie Parish.

“May his memory be eternal”

To send flowers to the family or plant a tree in memory of Louis R. Morrette, please visit our floral store.